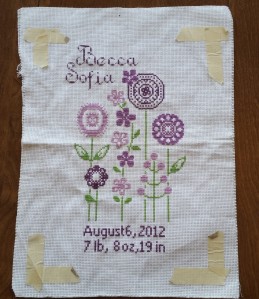 (This is an 8×10 birth announcement cross stitch that took 2 years to finish because I was afraid to mess it up with lettering. Pattern found here.)

So tired at the end of daylight savings week! It takes us until the first full weekend to re-set our body clocks.

History of Indigo Dying at Creativebug. My favorite part was about a 16 year old pre-revolutionary war girl in South Carolina.

I love this dress – using solid fabric creates such a different look than the loud prints I’ve previously seen this sewn up in. I get distracted by prints when I’m buying fabric but good black dresses are staples in my wardrobe and this double gauze would carry it into summertime wear.

My kids couldn’t complain about wearing coats if they had a cute one like this, could they? (And yes, yes they could, but thankfully it’s turning warmer and the only problem in the morning is debating between a sweatshirt, light jacket, or just long sleeves).

This set of art picked out by Erin McKean could gladly come live at my house.

Some good reminders about DIY anxiety (don’t compare your sewing to the results of professionals!).

I’m loving the bright colors in this shop. Gets me excited for summer. (via Brickyard Buffalo)

So glad that these Merchant & Mills sewing themed clothes from Uniqlo are available state-side now!

If the-toast wrote vintage pattern commentary tumblr. I can’t even pick a favorite.

I went to my local Mancuso quilt show last weekend. Yet again, the community of quilters online has not translated to these shows. This quilt won an award, and won the modern category for an AQS show in 2013. Unfortunately, I don’t see much that’s original to this quilt as a design; it uses Yoshiko Jinzenji fabric and is derivative of her designs. The piecing was not technically advanced, and includes a border, which is not a hallmark of “modern” design as defined by the modern quilt guild. The quilting added nicely to the design, and I can see why the judges like this quilt, but I also wish that something more original was being rewarded. There’s a lot of room for the growth of modern quilting on the local level at various local modern quilt guilds and in terms of what’s being entered in shows. I don’t understand, either, quilts entered in competitions made from other people’s patterns (especially when the pattern designer isn’t credited) but it’s not against the rules and the quilters are able to show their skills and proficiency in making the designs.

I’m in a Cotton & Steel swap on instagram with 600 quilters, but I walked by about 75% of the vendors and saw NO Cotton & Steel, and only one booth that specialized in modern fabric. Their specialty was F8’s, and patterns for those. They also referred to Dear Stella as a “she” as in, “that Stella has the cutest prints”, so it’s not someone who’s totally plugged in (although it turns out maybe they want Stella to be a brand rep, if not a designer). So another reminder that just because something feels like it’s everywhere online, there are still plenty of people who haven’t been reached. I overheard someone telling a friend about a quilt teacher she had just heard of from craftsy. I had a really good experience in the class I took, though, that wasn’t affected at all by a lack of other modern quilters. Good design doesn’t depend on the style of your stash.