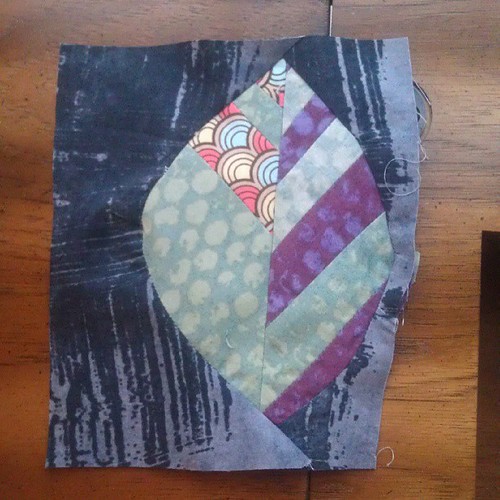 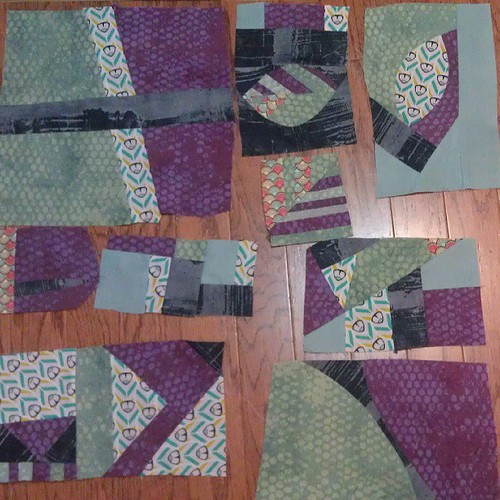 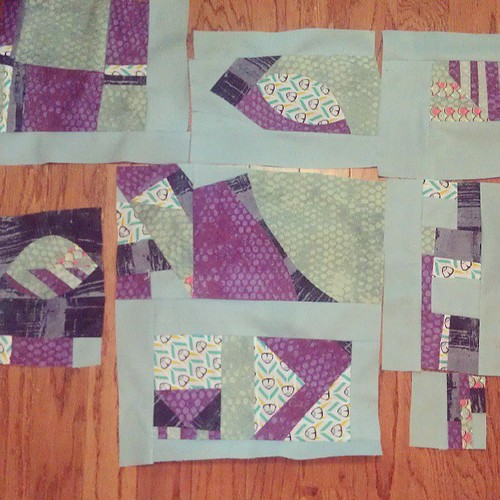 After I finished the triangle quilt, it was time for some fabric play. It’s been a little while since I’ve tried to build something in an improvisational way from start to finish.

I’m a much better quilter in my head than I am in real life. The only way to get better is to practice, and this is part of that process. I’m not quite sure about the overall effectiveness of the layout, but I’m thinking of it as an improv sampler – a few curves here, some crazy piecing over there. 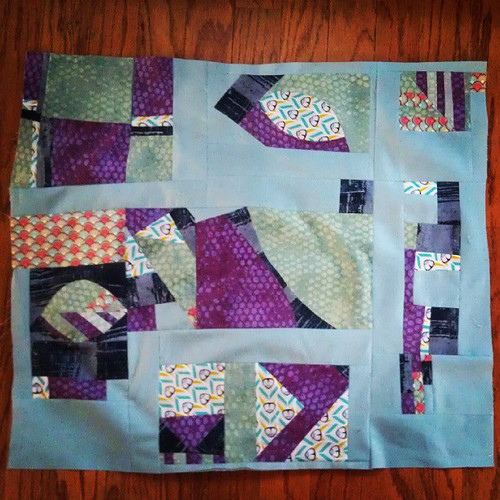 This quilt snippet started with some Marcia Derse fabrics, a thought of Gail Baer’s colorblock quilts for that center section, and some practicing with curves. I think I’ll do some circular quilting to finish it up and see if I can help flatten out the whole thing.
Standard 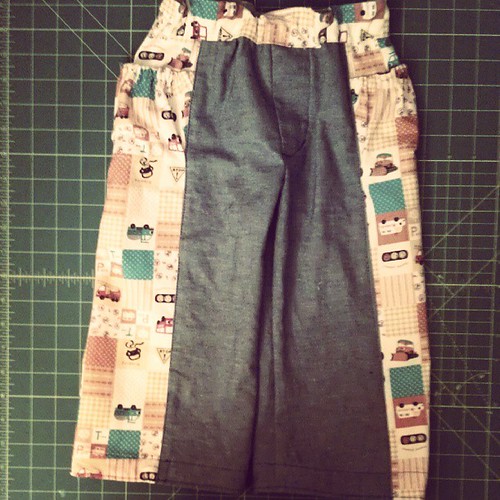 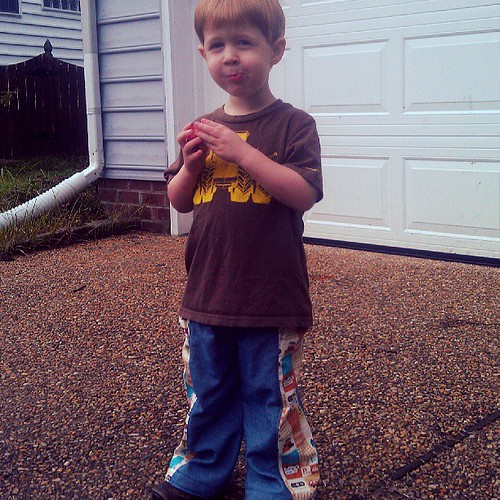 Have you made these pants from Sewing for Boys? They’re really appealing as a way to include a spot of cute fabric on the side of some boys’ pants, plus pockets are fun (except Will doesn’t use them yet). They’re kind of a pain to make, though! There are several errata for the book, as with most sewing books, unfortunately, but after staring for awhile at instructions that didn’t make sense I decided that  I should probably just sew them like it made sense to me, instead of worrying too much about following them. There were a couple new things to learn, like the hem facings and faux fly, but I did the waistband a completely different way that worked better for me. Now that they’re done, Carl thinks they’re too girly, and I admit they are kind of like bell bottoms. I’ll have to use a pair with a slimmer leg for my next pair of boys’ pants, and maybe keep the contrasting fabric to the inside.
Standard 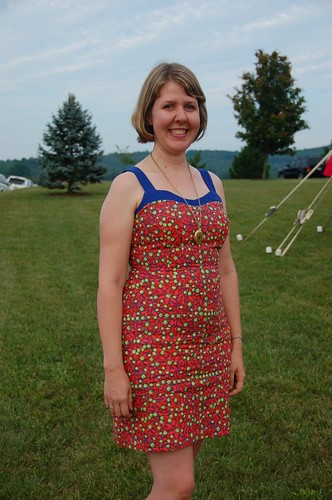 This dress was nowhere near my to-sew list, but when we got an invite in July for an August wedding I realized I would probably have enough time to make something and started looking through my stash for something that would be dressy enough, a little beyond work wear. I had 1.5 yards of this AMH linen print stashed for a skirt, but there is enough for this shift dress too, for a totally different look! the blue is the only solid I had that would somewhat coordinate in a heavier weight fabric, and it’s a Lisette twill from Joann’s. Thank goodness for pictures of finished objects made in the AMH print – most of the swatch photos I’ve seen online don’t really show the lime green grid very well. There was enough fabric for me to play with the placement, but obviously I didn’t realize the band would be around the widest point of my hips with a bullseye on my belly, or I might have shifted it a little! 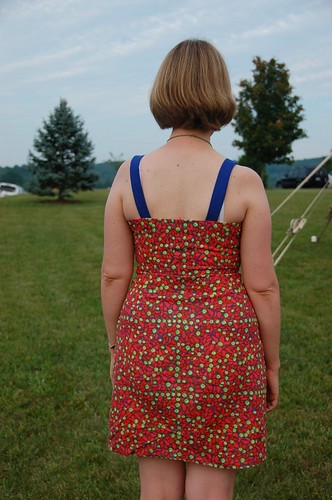 There aren’t many pattern reviews for 1688, but everyone always complains about how there’s too much ease in big 4 patterns, and to look at the finished garment measurements. I don’t know if I based my measurements on the finished jacket instead of the dress, but I measure a 14 and made a 10 on top and 12 on the bottom, and had to eke out the seam allowance on the top with not a lot of room on the bottom either (but I didn’t change the seam allowance there). I feel like I could have made a straight 14 and had a little extra room to breath, although maybe the darts wouldn’t have been as spot-on. The other thing I would note is that I usually have to take out an inch or two in torso length to avoid pooling in the back. I didn’t adjust this pattern at all for that, and it fits well.
The lining is an orange linen-rayon blend. Not the softest on my skin, but about the same weight as the dress. If I’m not sure if I’ll finish a project, I definitely don’t want to buy new materials for it! I used to dislike any hand stitching on a garment as a sign of something being homemade, but I decided that it’s a feature because when do you get so much care and attention paid to store-bought goods. Beyond the fact that never would a store-bought dress be sewn to my exact measurements like this.
I was feeling pretty good about making the dress until the zipper. I installed an invisible zipper and it couldn’t hold the strain of holding that much of the seam together over my pear-shaped (I mean AWESOME shaped) hip-waist ratio, so I put in a hand stitched metal zipper instead, and it worked better, although the stitches at the bottom popped out when I wore it so I had to sport a safety pin that day, so there’s a repair to do already. Oh well, my next one will be better. 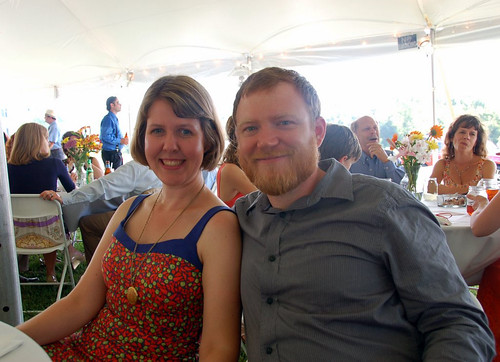 I’ve made myself a few skirts and easy tops recently, but it feels like a nice accomplishment to put together a dress, for some reason. Let’s hope there are more soon!
Standard